An iron-willed demon assassin, the angel Lysander has never known lust—until he meets Bianka. Spawned from the bloodline of Lucifer, the beautiful but deadly Harpy is determined to lead the pure-hearted Lysander into temptation….

The Darkest Angel is my favorite from the three LotU novellas (The Darkest Fire, The Darkest Prison). Why? Because it is the best, of course. 🙂

Chronologically, The Darkest Angel is between Sabin’s book, The Darkest Whisper and Aeron’s story, The Darkest Passion. So we get a little bit from Sabin and Gwen, as well as an appetizer from Aeron and Olivia’s story.

But the best is Paris’ appearance. Oh, Paris, my favorite Lord! Normally I’m pretty satisfied with my imagination, but Paris and Lysander’s oil wrestling is something I definitely want to see for real. I guess I’m not the only one…

Okay, back to Lysander and Bianka…

Lysander is a warrior angel, one of the Elite Seven. As an assassin, his only goal is to destroy demons. His calm and sense of duty are unflinching. But as every angel, he has one potential downfall.

When they found this… thing, this abomination, they happily destroyed it before it could destroy them.
Lysander had finally found his.
Bianka Skyhawk.

Bianka is the daughter of a Harpy and a phoenix, spawned from the bloodline of Lucifer. She is a thief, a liar, a killer.

Lysander’s plan is to hold her captive and train to be sinless.

Bianka’s plan is to drive him utterly insane with lust.

She is untameable, playful, and naughty. Soon Lysander’s iron control is cracked and Bianka realizes that she doesn’t really mind to be captured after all. 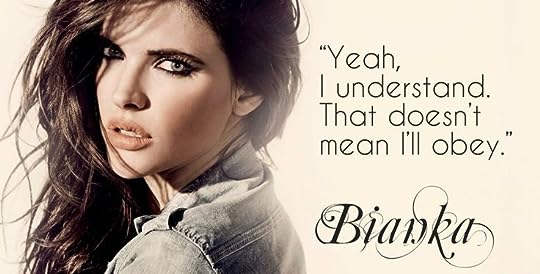 I loved their interactions, their bantering:

She stuffed another scarf in her purse.
“Put it back, and I’ll give you a kiss,” he gritted out.
“Here’s a proposition for you. Steal something from this store and I’ll kiss you.” 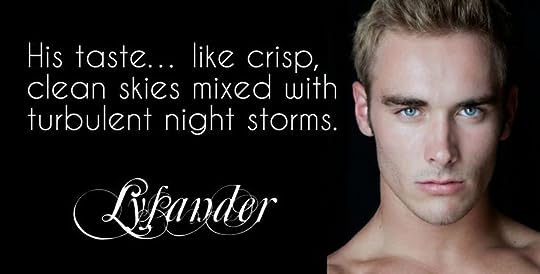 The ending is just perfect!

“You have not committed an unpardonable sin.”
She gulped. “And if I do?”
“I will fall.”

Love, love, love this story! Oh, and I do want my own cloud!