The Darkest Fire – He is the guardian of Hell, more monster than man. She is the goddess of oppression, more angel than woman. Together they will enter the flames to battle a horde of demon lords – and discover a passion unlike any other… Discover the origins of Pandora’s box and the demon spirits trapped within.

The Darkest Prison – passion and danger collide in this brand-new Lords of the Underworld adventure! Once, Atlas, the Titan god of Strength, was the Greek goddess Nike’s slave. Now, he is her master. And soon these sworn enemies destined to destroy one another will be forced to risk everything for a chance at love.

The Darkest Fire
Prelude to the series, the story of the demon High Lords’ deserting Hell and the creation of Pandora’s box. My review.

The Darkest Angel
My favorite from the novellas; the love story of Lysander, warrior angel of the Elite Seven and Bianka Skyhawk, the Harpy. My review. 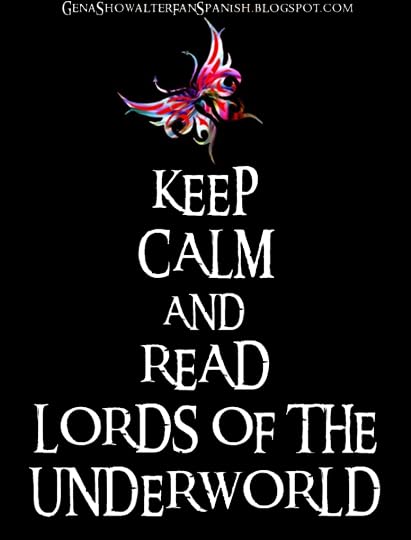 After the novellas, the Bonus Guide starts with Cronus foreword, and continues with Kresley Cole’s chat with Gena. Pretty awesome.

The Bonus Guide also contains files about the Lords of the Underworld from the private records of Dean Stefano, with all the features of the Lords: their appearances, strengths and weaknesses. If you can’t remember where their butterfly tattoos are, all you have to do is open this book. 🙂

Gena also shares how she had created the Lords of the Underworld, how the idea and the characters had developed and changed. You can read the first three chapters of the first version of Maddox’s book, Awakening Pandora.
I’m generally not too interested in the ‘hows’, only in the outcome. And I have to say, it was very smart to re-write Awakening Pandora into The Darkest Night. That version is like the deleted scenes from movies: there is a good reason for deleting… There is not enough appeal in its storyline and characters that would make me read the series further.

The best part of the Bonus Guide is William’s interview-series with the Lords! Hilarious!!

The Round Table with the women couldn’t engage me at all, neither the Sneak Peek into Aeron’s book as I’ve already read The Darkest Passion.

But overall, it is a great and entertaining book. Because of the novellas and the interviews, it is really worth reading. A must read for LotU fans!!!