Denial only lasts so long… eventually the heart wins out.

What if loving him…

After recent events that had his life flashing before his eyes, Israel Storm is re-evaluating everything. His friends. His priorities. What’s not going to change is the deep connection he’s developed with Reggie Turner. They’re comfortable with each other, partners in crime with no qualms about sharing women. Whatever Is needs, Reggie is the one he calls. Their bond can survive anything. But maybe not the kiss Reggie plants on him out of nowhere.

Despite what Is thinks, that kiss came from somewhere. An un-named current has been flowing between them for months. Reggie doesn’t bat for his own team, but the more time he spends with Is, seeing past the rough façade of the man leading The Rude Boys, the more Reggie loses sight of labels and where he fits. All he knows is there’s something there, something Is will never acknowledge. One kiss leads to a punch that lands Reggie in the ER, and sends Is digging through his darkest memories in search of himself.

(Watch Me) Body You is the second book of the Run This Town series, which is a sequel/spin-off of Brooklyn Sinners. Though RTT is enjoyable without reading BS, the latter is highly recommended too!

(Watch Me) Body You is the story of Israel Storm, head of The Rude Boys and his best friend, Reggie Turner.

Is and Reggie are clicked from the first moment they met. But for a while Reggie’s feelings for Is morphed into something more, something not exactly brotherly. Is feels the same, but unlike Reggie, he doesn’t admit it, even to himself, let alone his best friend.

This awkward shit was fucked. He had no idea how to fix it, how to fix them without thinking or talking about what he didn’t want to think or talk about.

The denial part makes half of the story. You’d think it is too much, but the struggle of these two idiots (Reggie tries to provoke some response out of Is, meanwhile Is does his best to deny everything and pretends that nothing has changed between them), the anticipation, the sexual tension are very enjoyable. 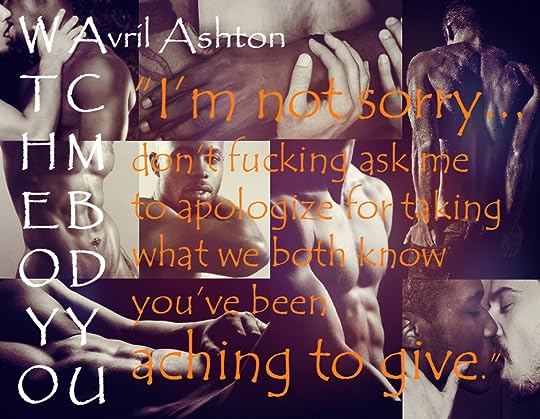 The problems come after this.

My main problem with the story that Is’ reason to deny his feelings is not clear. There is an assumption by Mateo though…

“Because even if you try to ignore it, the reality doesn’t change.” Teo’s tone was kind, but no less chilling. “Many of his contacts are still back in Jamaica, Reg. Don’t let the positive shit that’s happening over here fool you, because for men like us, things aren’t that nice back there. You know this.” Reggie nodded, numb. Teo sighed. “Forget that for a second and think about the men who work for him here, who are all exclusively Jamaican. If they find out, that’s it. It’s over for him.” He patted Reggie’s knee. “Don’t get your hopes up. I care about you both as brothers, and if you feel like you say you feel, I know that shit isn’t gonna go away. Realize why he might not react the way you want him to.”

Okay, it is understandable. But Mateo says “that shit isn’t gonna go away.” And yet, it is forgotten like it has never been an issue. What is Is’ real reason? That’s it? Or something else? Is and Reggie never talk about it, it never occurs again in the story. And if that’s it, how in the hell that shit goes away that easily?

The Romance
Nice anticipation, tension, then Is takes a 180, and voilà: happily ever after. Is changes his mind when X and Dima drops that Reggie might have moved on. He storms over at Reggie’s place in a jealous tantrum, and promises forever to him. It is just ridiculous. I mean, Is is an adult not a teenage boy, he is very well aware his own emotions, even if he denies them. Only the possibility of Reggie with someone else can trigger him into action?? Not to make Reggie happy, not to come clean with his feelings, not the possibility of a happy future together. No. Only jealousy…

But at least jealousy finally blasts him out of denial.

Apart from that, the romance was really engaging: hot sex and deep emotions. What else do you need?

In case it wasn’t already clear as to why I’d take a bullet for you.” He tugged on Is’ wrist, brought him closer. “I love you. And in my world that’s the point of everything.”

Family drama
As for Is, it had potential but it was wasted. Reggie’s family issues seemed to be there just for the balance but it was not bad.

The secondary characters are awesome!! X and Dima, Mateo, Tek (can’t wait his book!), and Quinn.

Overall, despite its flaws, (Watch Me) Body You is a very enjoyable read.

See my favorite quotes on my Tumblr page,
Daily Quotes by Exina.