Even the strongest of buildings start out as plans on paper, and every architect knows that sometimes plans need to change. Sometimes, these lessons are learned on the job.

A successful New York architect, Thomas Elkin almost has it all. Coming out as gay and ending his marriage before his fortieth birthday, he needed to start living his life. Now, four years later, with his relationship with his son back on track, and after a few short-lived romances, this esteemed traditional draftsman thought he knew everything about architecture, about life.

Cooper Jones, twenty-two years old, is about to take the architect world by storm. Talented, professional, driven, and completely infuriating, Cooper is the definition of Generation Y.

Elements of Retrofit is the first book of the Thomas Elkin series.

Thomas Elkin is an icon in the architecture world. He is successful, uptight and very lonely. He is “expensive, polished and predictable.” But life is not predictable at all, and now it brings a delicious, mesmerizing surprise. It’s Cooper.

Cooper Jones is a young, dedicated and very talented architect. And he is seriously and irresistibly hitting on Tom. 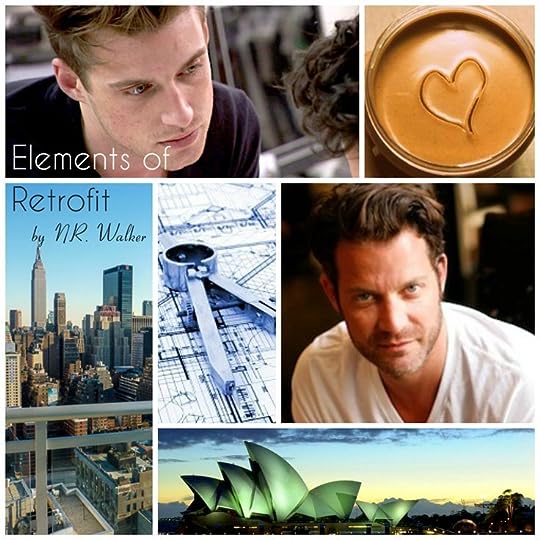 Jesus. I wasn’t imagining things. This kid was seriously flirting with me. Fuck.
I should have stopped it.
But I couldn’t. While the logical, sensible side of my brain was telling me to put an end right now to this nonsense, the selfish, infatuated, stupid part of my brain wanted it. My body wanted it.
I looked back at him, at his smug little smile, then snatched the jar of peanut butter from his hand. “Flattery in a jar, huh?”

Their interactions are lovely and sparkling, told from Tom’s viewpoint. His insecurities about his age are slowly thinning by Cooper’s persistency and charm.

Cooper’s enthusiasm and flattery sometimes was too much, but it was smartly balanced with his old man jokes.

“No jokes about the elderly?” I asked. “Yesterday you were full of cheek about my age.”
“Can you remember yesterday?” he asked, wide-eyed. “Your Alzheimer medication must really work.”
“You’re such a little shit.”

Elements of Retrofit is an engaging and sweet story with humor and steamy sex scenes. Highly recommended!